This particular motorcycle has a complex history, going back to the very beginning of my involvement in the marque. In about 1995, when I re-entered the wonderful world of motorcycling after a 20-year layoff, I first picked up a basket case Commando to restore. Quickly realizing this was going to take some time, I started looking around for something I could ride immediately. One of the members of Norton Colorado at the time, Frank Blaha, offered me a 1975 Moto Morini 3-1/2 Strada which quickly entranced me. I rode it on many Norton club outings, and was even asked a couple times if it was a Norton!

Having been bitten by the Morini bug I started connecting with other enthusiasts, including a fellow named Glenn Bewley. At the time he lived in Atlanta. One of my business trips took me through there so I arranged to visit. He had a very large collection of Moto Morini parts and project bikes, including a 3-1/2 into which he had intended to install a 500 engine for his girlfriend to ride. I think the girlfriend may have just recently moved on, but for whatever reason he indicated that he was thinking of selling it all. It was too much for me so I let it go.

It wasn’t much later, however, that one of my other friends from the on-line Moto Morini community, Jim Calandro, told me that he and another friend, Craig Hunley were in negotiations with Glenn to buy the whole collection, and I was invited to join in. So what became known as the “Pile o’ Morini” migrated from Atlanta to Jim’s place in North Carolina, waiting for the three of us to gather and divide the spoils. At Christmas 1996 I drove east to attend the jolly event and drove away with my small pick-up truck filled with most of a 3-1/2 and a 500. 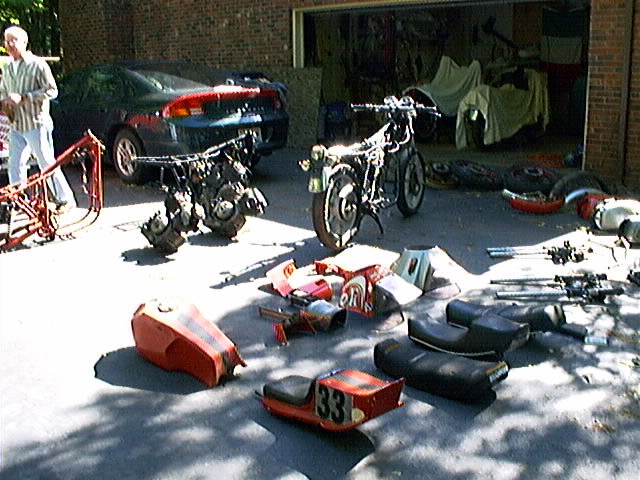 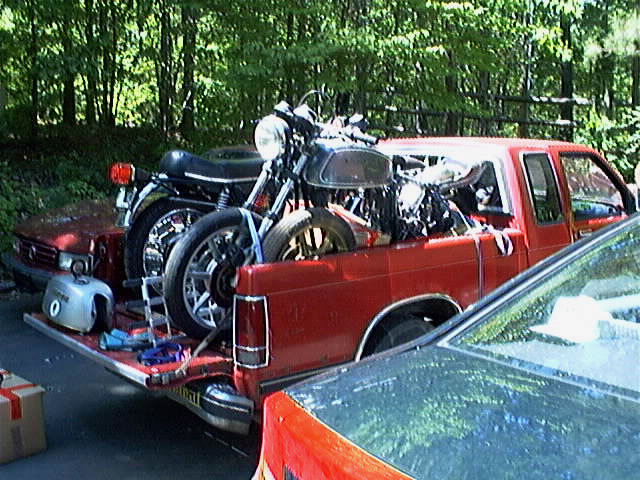 I didn’t do much with this stuff, as I had a good-running 3-1/2 and, soon, a well-restored Norton Commando that immediately began demanding a lot of my attention. But in the late 1990s I met Andi Seiler, a full-blown Moto Morini nut from Germany who was at that point living in Golden with his American wife. Andi was a motorcycle journalist, working for Roadrunner magazine at that time. Andi was always keen to do a project and he is much faster and better at it than I am. I sold him the bits he needed to make Glenn Bewley’s original plan come true: a 3-1/2 chassis with 500 engine. Of course it needed to be a cafe racer. Andi did a superb job and wrote an article about it for Roadrunner.

Actually, Andi had already built a similar bike back in Germny, but instead of the standard Morini 500 engine he bored out the 350cc engine to 400cc using a piston kit from Ducati Development Dortmund. It has often been asserted that the 400cc conversion works even better on these engines than you’d expect from the increase in displacement because the wider bore clears the valves better and improves the breathing. Here’s a photo of that bike:

The “second generation” bike differs in several ways. The main difference is the use of a standard 500cc engine rather than a bored out 350 engine. Although the overall stylistic approach is very similar there are a few differences here too: Andi did away with the side covers, used cast wheels, and changed the paint scheme on the tailpiece.

Sadly, the 500 engine Andi had used (without rebuilding it) turned out to have a problem in the bottom end, a deep knock. Even more sadly, Andi’s personal life went into a nosedive that led to him returning to Germany, and he couldn’t take the Cafe Racer with him because of the strict German vehicle laws. So I bought it back from him, along with his old AHRMA racer that turned into Tsubame.

I was never a fan of the 350/500 combo because I felt the 350 was sportier in character and I loved the 6-speed gearbox. The 500 is a 5-speeder that has about the same performance envelope but isn’t quite as sharp (rather like an 850 Norton vs a 750). So when James Robinson broadcast a search for a rebuildable 500 engine I sold the one from Andi’s Cafe Racer. I would not have done it, of course, if I did not have a plan for replacing that engine. My plan was simple: reunite the lovely chassis with it’s original 350 engine, which had been part of the original Pile o’ Morini.

The matching numbers engine was terra incognita. I couldn’t recall anything that Glenn may have said about it. Therefore it was going to have to come apart completely for inspection and, probably, some repair. In the meantime, during one of my trips through Europe I had stayed with Andi Seiler and picked up another 400cc piston kit.

The engine is currently in the late stages of a complete rebuild (using the 400cc pistons) with considerable assistance from Scott Potter. The chassis is just waiting for it’s new heart.