This section of the website is devoted to my 1956 Laverda 100 Sport with frame number 561766 and engine number 561766S, the “S” indicating the Sport model. The first two digits of the serial number indicate the year (perhaps model year) of manufacture, so this is #1766 of the 1956 production run. I believe it was originally imported to the U.S. by Doug Hector of Texas, who sold it to Benjamin Zinnen of Los Angeles, from whom I bought it in December 2009. It still has the last Italian license plate, UD3-9173, indicating it came from Udine, “a city and comune in north-eastern Italy, in the middle of the Friuli Venezia Giulia region, between the Adriatic Sea and the Alps”, quoting Wikipedia.

Because there’s a shortage of information about these motorcycles, in English at least, I’m going to add a page about their history and PDFs of the Parts Book and Owner’s Manual, as well as a number of pages documenting a full engine rebuild by Scott Potter and many details of the chassis. I don’t claim to be any kind of expert, so I am happy to correct mistakes if you are gracious about pointing them out.

My fascination with Laverda 100s is a little difficult to justify in a rational way. It’s too small and slow to be practical as a rider except in rather specialized circumstances and it’s designed for skinny Italian youths 3-4 inches shorter and 75 pounds lighter than I am. 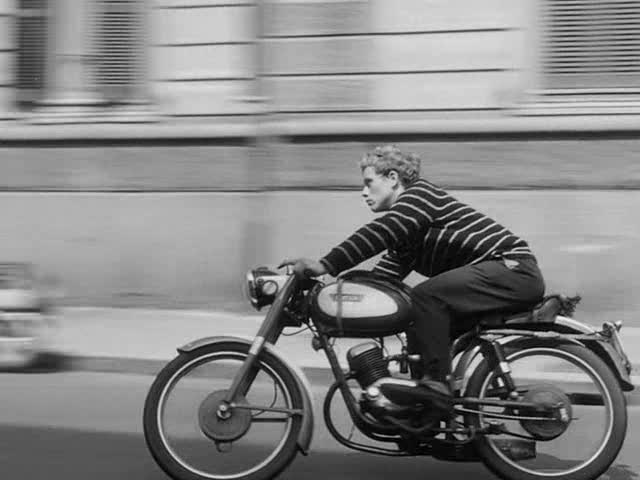 On the other hand I’m a hopeless Laverda enthusiast and the 75/100cc bikes were the foundation of the Laverda motorcycle story; they were extremely successful racers in the mid-50s and also a great commercial success, without which we would never have had SFCs, Jotas and the like. Plus, they are just cute little buggers and they don’t take up much space in the garage.

Related pages (some under construction)

In December 2009 I was thinking about adding a small Italian bike to the herd so that I could participate in some of the rallies for such bikes, like Harley Welch’s Moto Giro d’California, that were starting to appear. I was hoping to find either a Moto Morini 175 or a Laverda 100, as those are my preferred brands and those models were dominant in their class in the over-the-road races (Moto Giro d’Italia, Milano-Taranto, etc.) for production bikes of that era.

Fate ran a Laverda 100 across my path first, in the form of a basket case on eBay with a Buy It Now price of $1100. I hesitated about 5 seconds before pulling the trigger. The moto was located in Los Angeles and I couldn’t gracefully get out there to pick it up until after the holidays, but I wanted to get it into the hands of someone I knew fairly quickly. Laverda friend Alan Chalk who lives in the area kindly performed that favor for me and I picked it up from him in January 2010, along with the 1984 Laverda RGA Jota I fell into around the same time. They made quite a pair in the back of my truck. 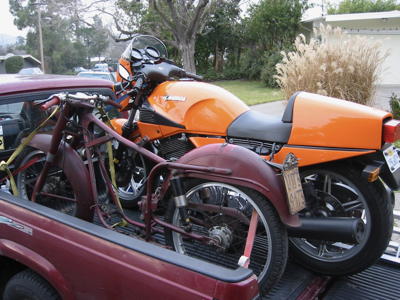 When I laid everything out at home, this is what I had: 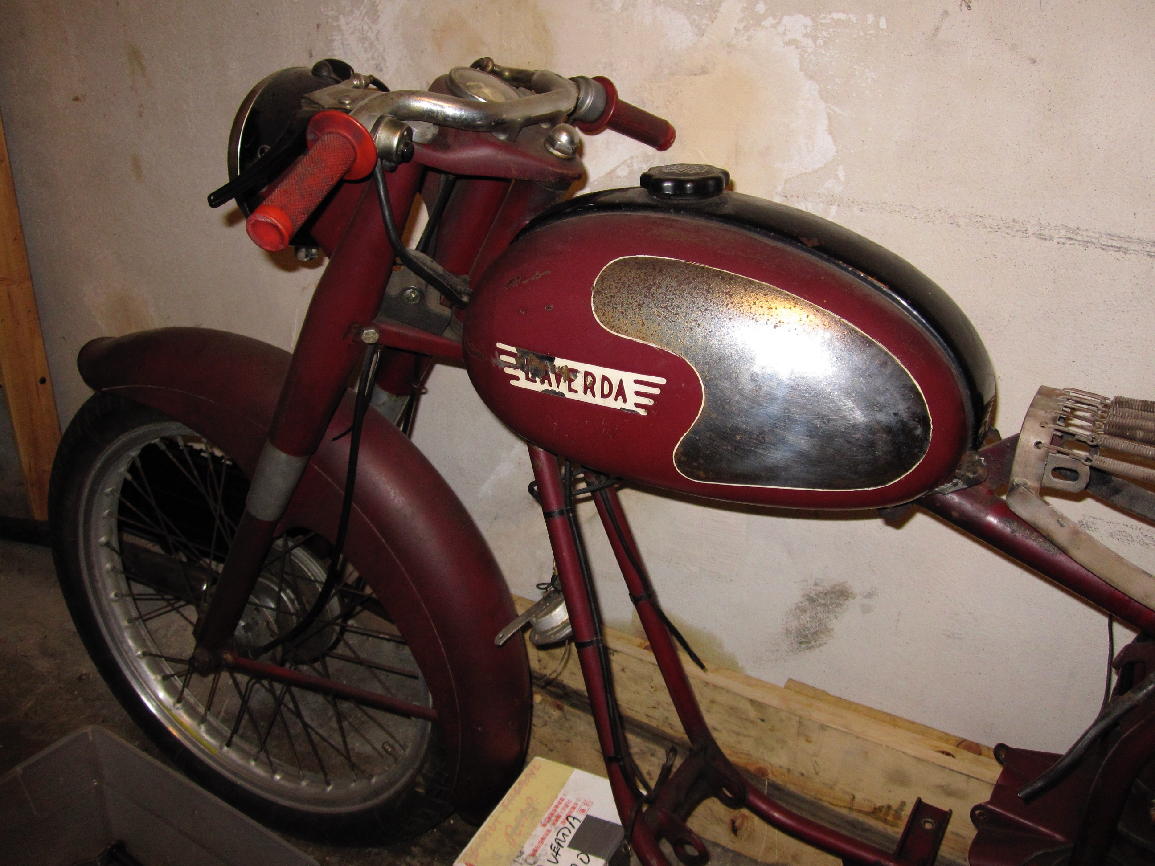 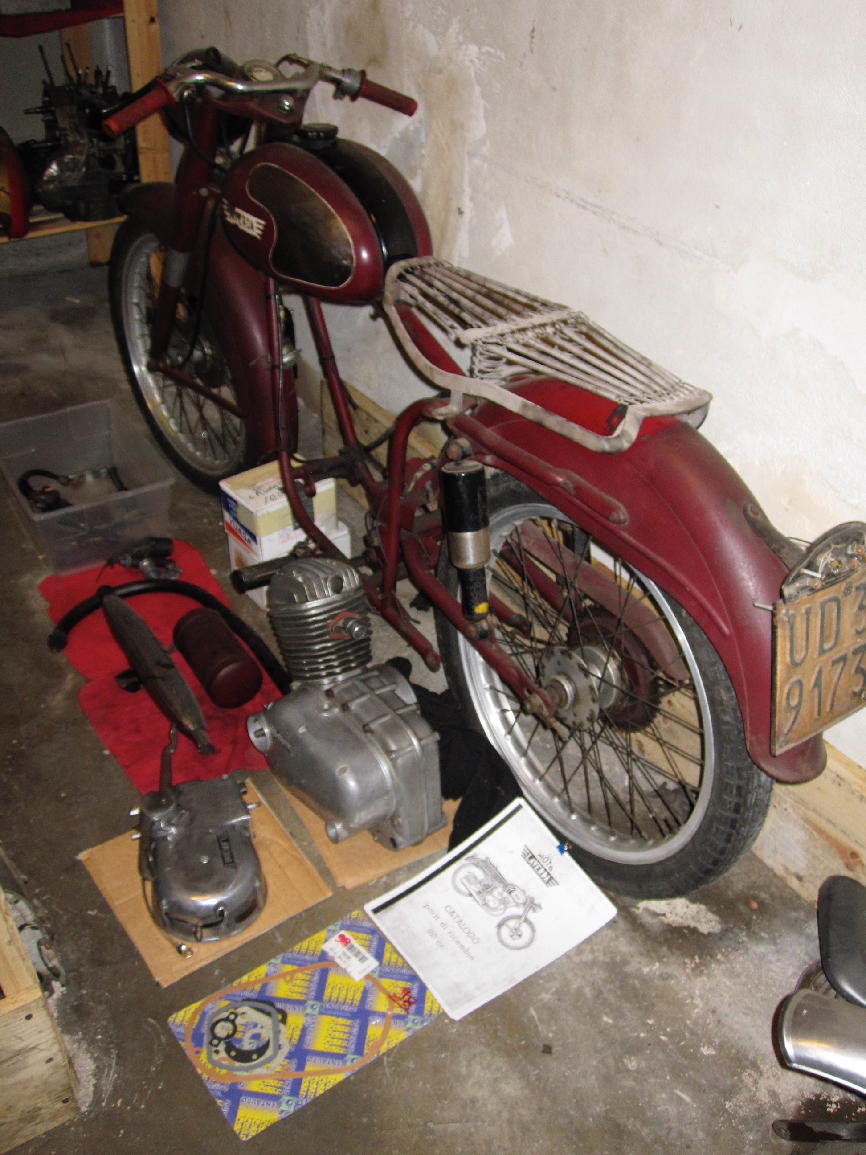 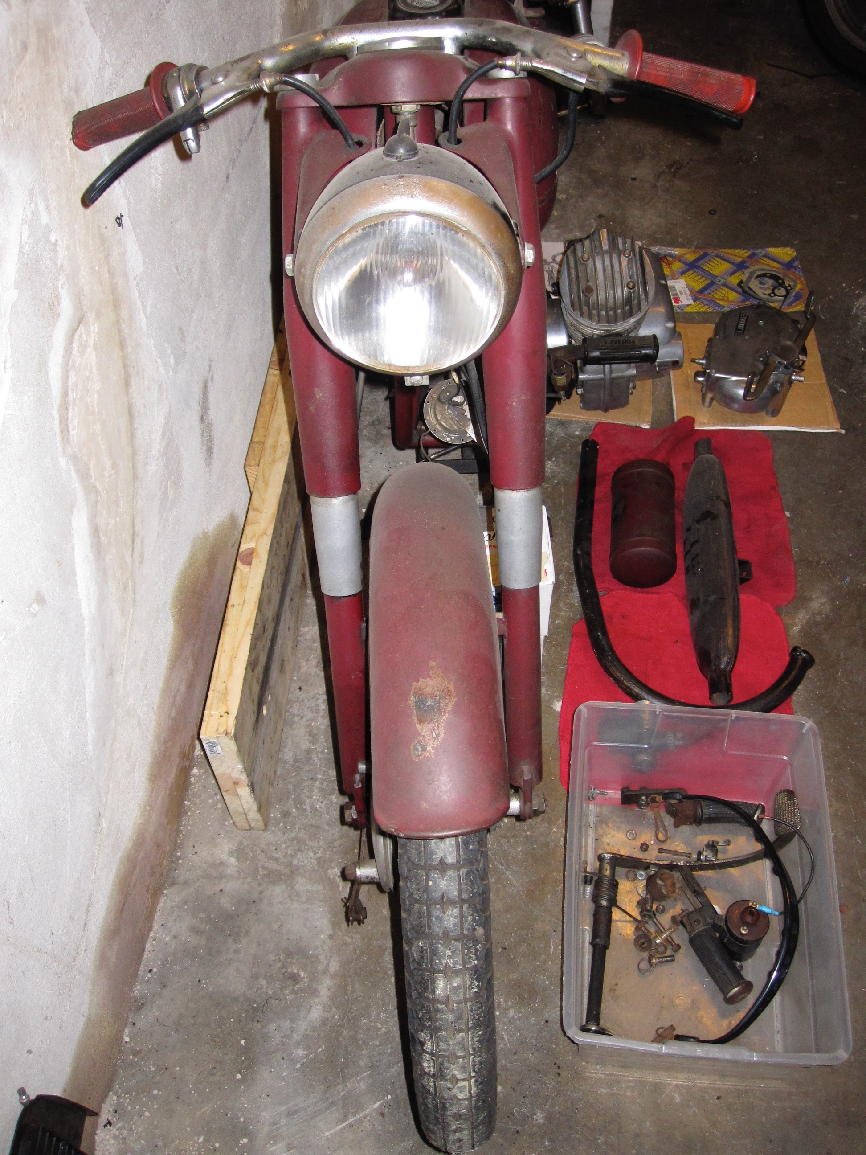 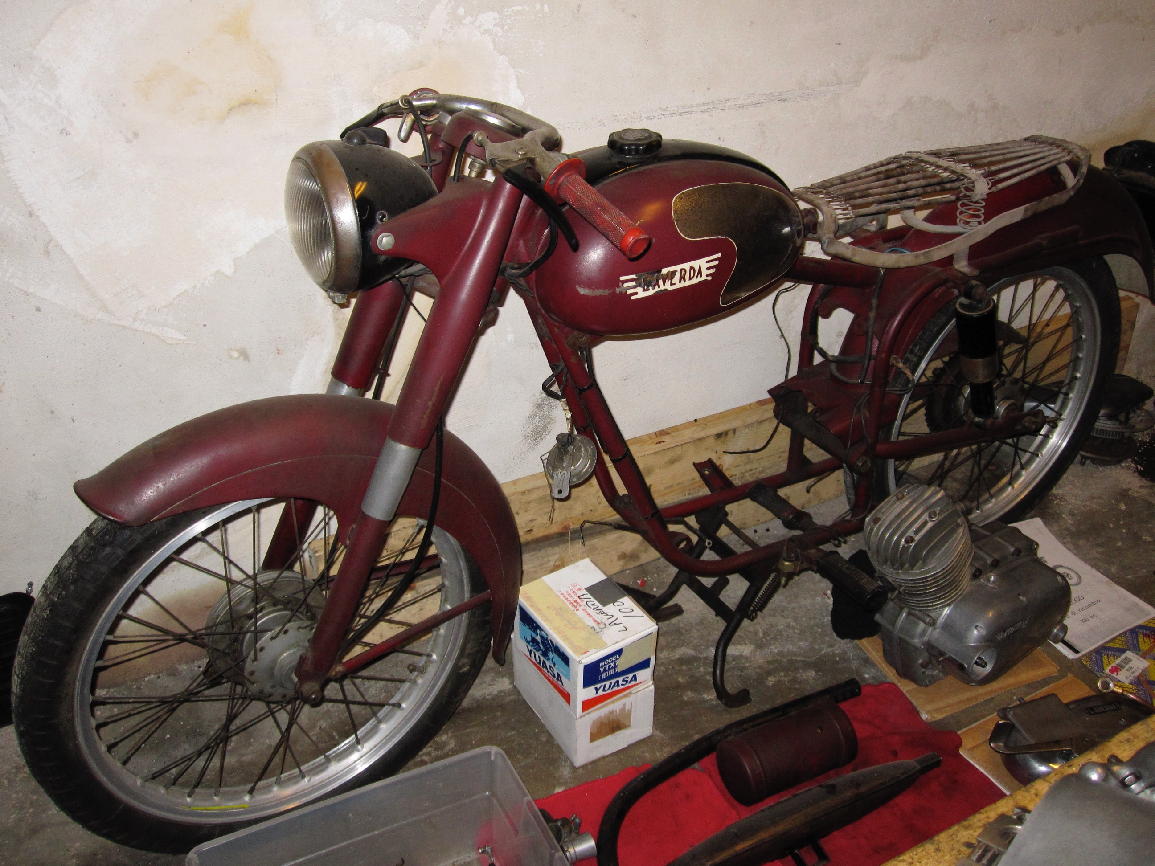 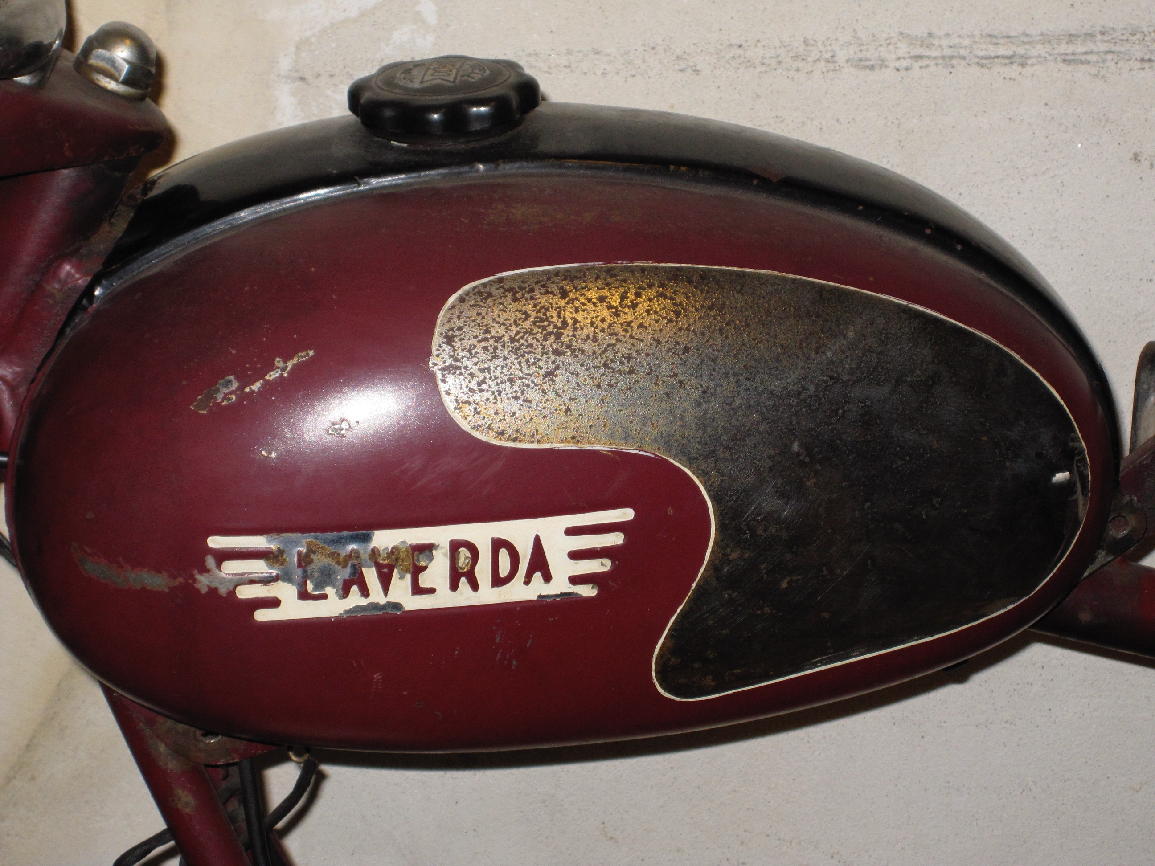 This looks like it should go together pretty easily, but there is a reason why the engine was out of the frame with the right side outer case removed and why the price was so reasonable. Benjamin Zinnen, the seller told me that he had started working on the gear selector mechanism for some reason and had inadvertently poked a piece that fell into the inside of the engine cases. Ben knew this meant the engine was going to have to come apart and that was more of a project than he’d bargained for. I spoke to Scott Potter (who had built one of these engines for himself) about this issue and he told me the shift selector mechanism in these engines was, ummmm, very different from what I was used to. I think the problem Ben was trying to address when he “pushed the wrong button” was a tendency for the gearbox to slip out of first gear into neutral. That tendency is still there, even after a careful rebuild, because it’s caused by wear on some of the selector mechanism parts that is not easily corrected. You can hold it in first with your foot easily and the bike is not going to spend much time in first gear, so I think I can live with it.

I proceeded to do some further disassembly of the engine, to get a better idea of what I was up against (documented in a separate page), which culminated in a decision to take the whole project down to Scott Potter’s shop in Hernandez, New Mexico for rebuilding, later in January 2010. As is usually the case with vintage Italian motorcycles that have been imported to the U.S., the engine was knackered. These motorcycles were used for daily transport in the 1950s and ran for thousands of kilometers (the odometer on mine reads 26,478 km) over dusty Italian back roads. Some models had rudimentary air cleaners but the Sport breathes through an open bell mouth. There is only a mesh screen for oil filtration, which cannot be reached for cleaning without splitting the cases, so the engines would build up impressive accumulations of muck composed of congealed oil, metal shavings and road dust. As expected there were also many cases of worn out or broken parts, many of which will be evident in the pages on the tear down and rebuilding.

Later in 2010 I went to England to pursue some seismological research and took some extra time to meet several motorcycling friends I had previously known only through e-mails and forum posts, including fellow Laverda nut Nick Alcock, who kindly let me take his Laverda 100 (I recall it is a Turismo) out for a spin around the neighborhood. 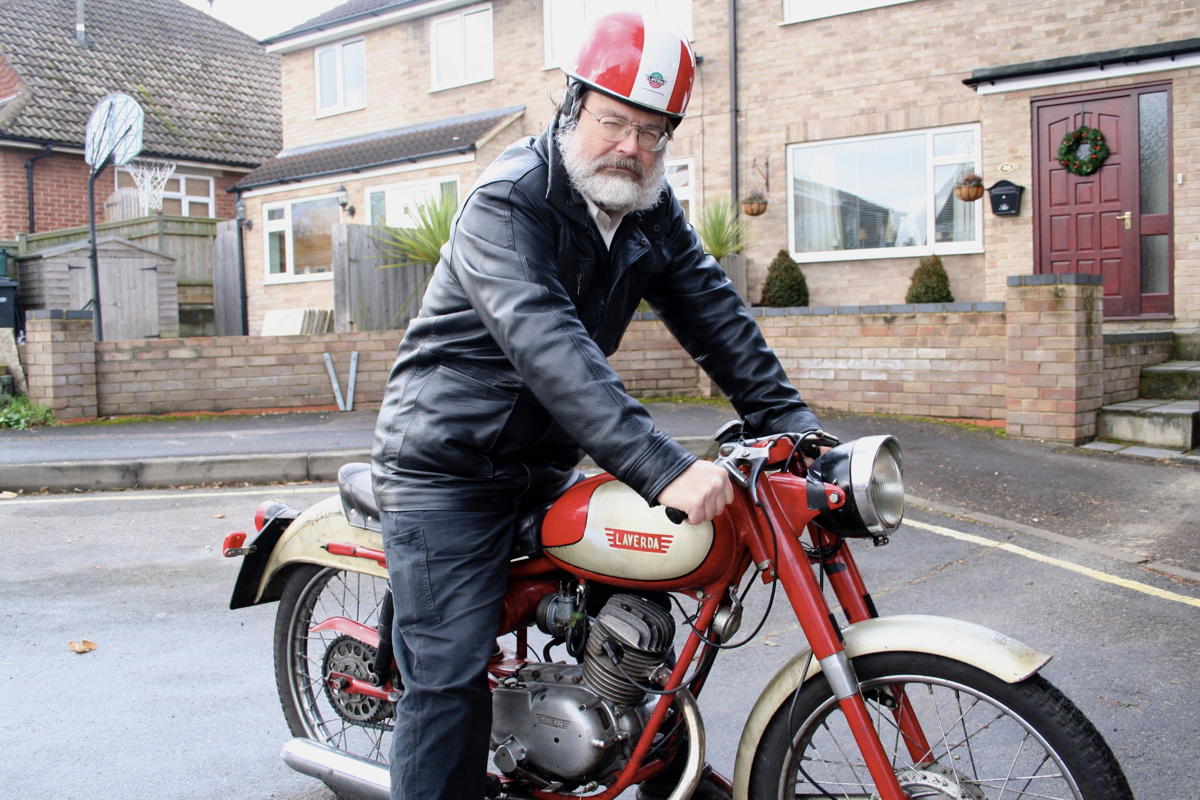 My instructions to Scott were simple: rebuild the engine to a very good standard and clean and assemble the rest of the motorcycle for riding while retaining as much of the wonderful, irreplaceable patina as possible. These efforts are documented on separate web pages, listed at the top of this page. I don’t think Scott would have taken the job if I had wanted him to make it look new. I had the seat reupholstered by a local expert named Jesse Lee who did many similar jobs for the late Jim Dillard’s fabulous museum of (mostly) small Italian motorcycles. The exhaust pipe and silencer were particularly scabby; it appeared they had been coated with some nasty substance that would not be easy to remove without further damage. When I discovered that those parts are being re-manufactured in Italy I ordered a set. There is new rubber on the foot pegs, fresh control cables and electrical wiring and fresh tires. Beyond these things it is very much as it came to me.

The following photos document the state of the 100 in September 2022. 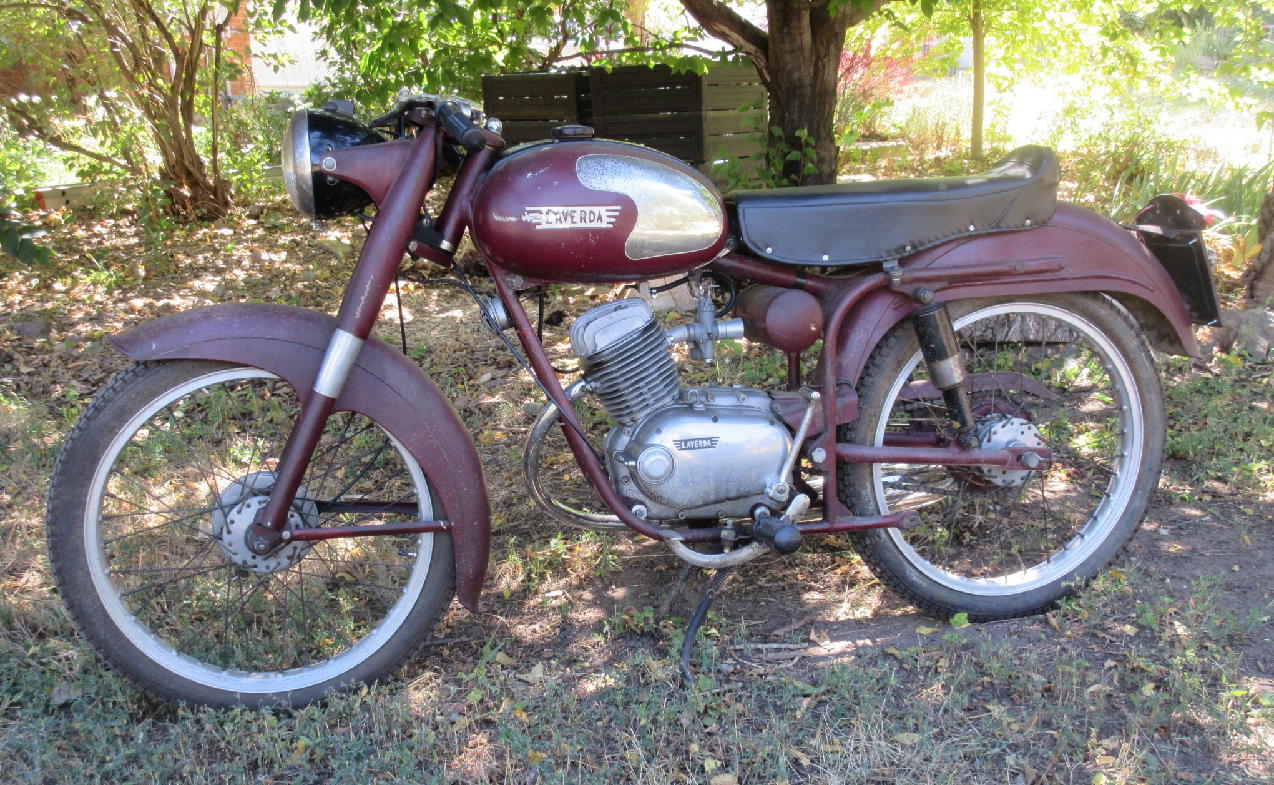 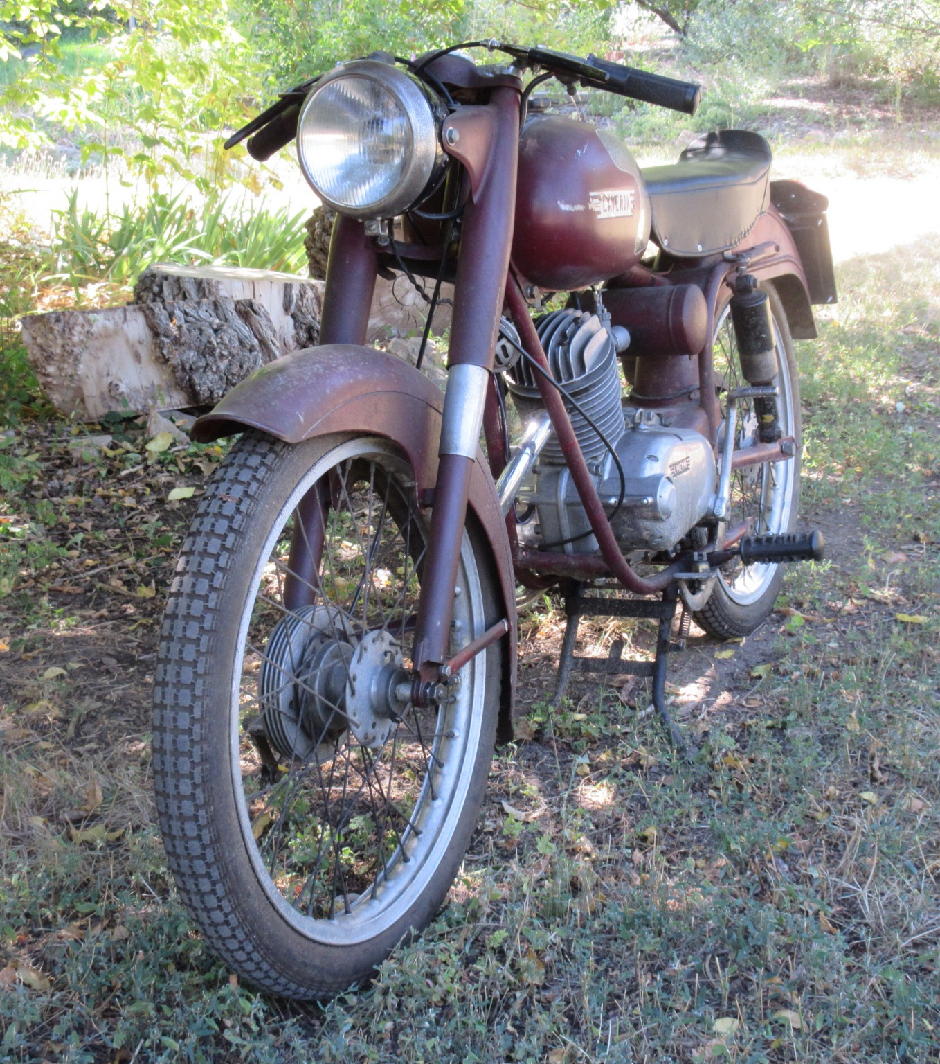 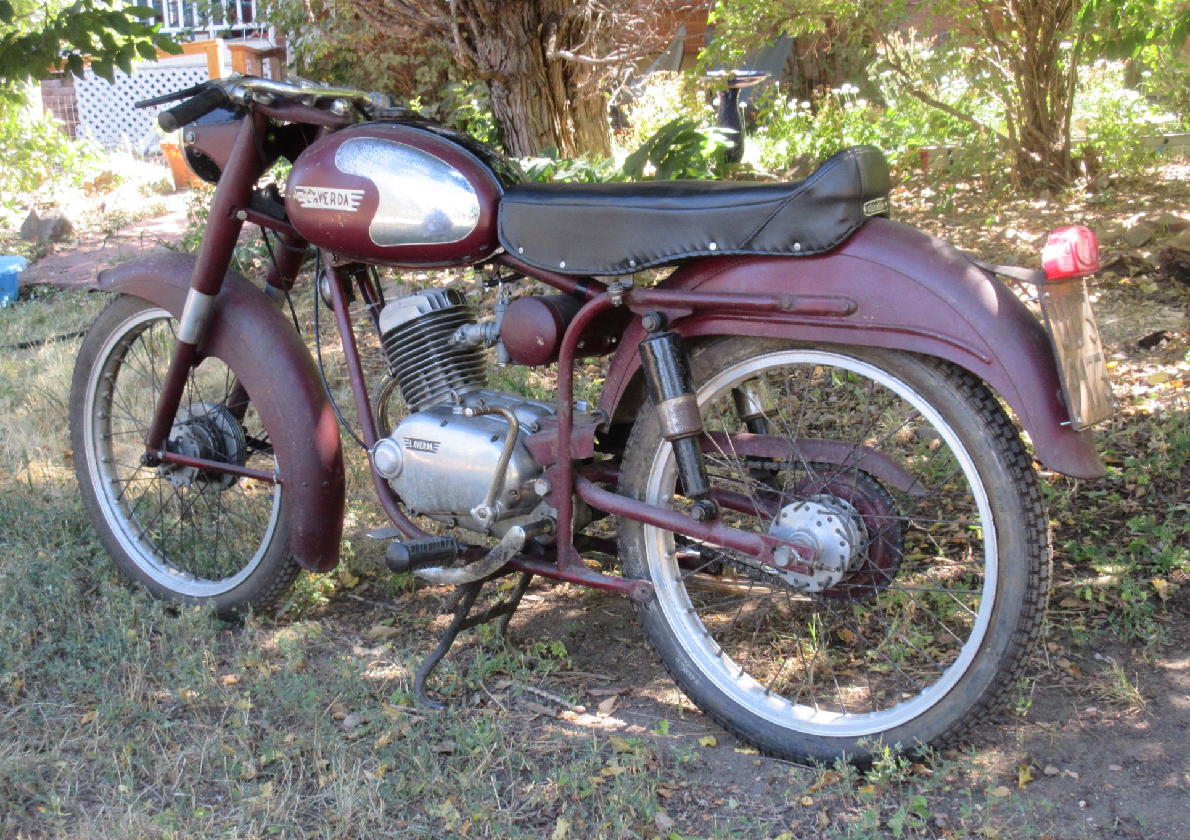 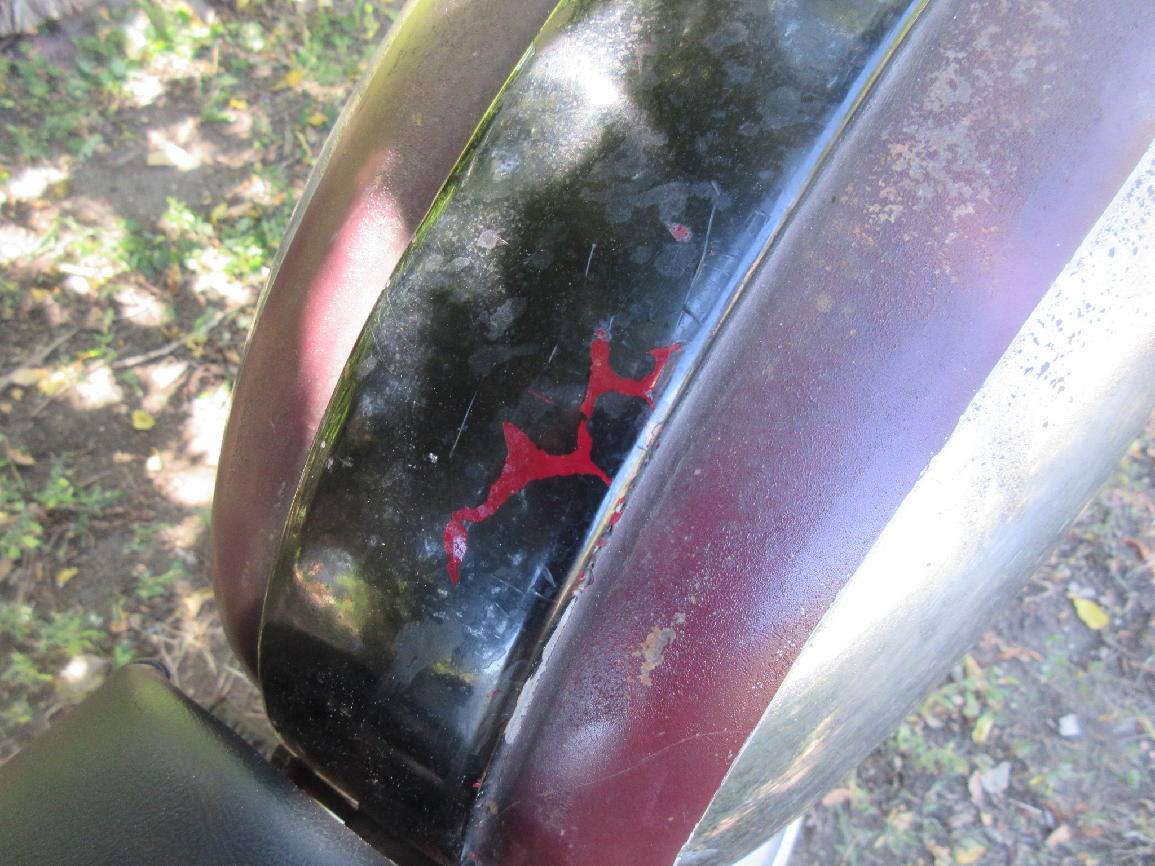 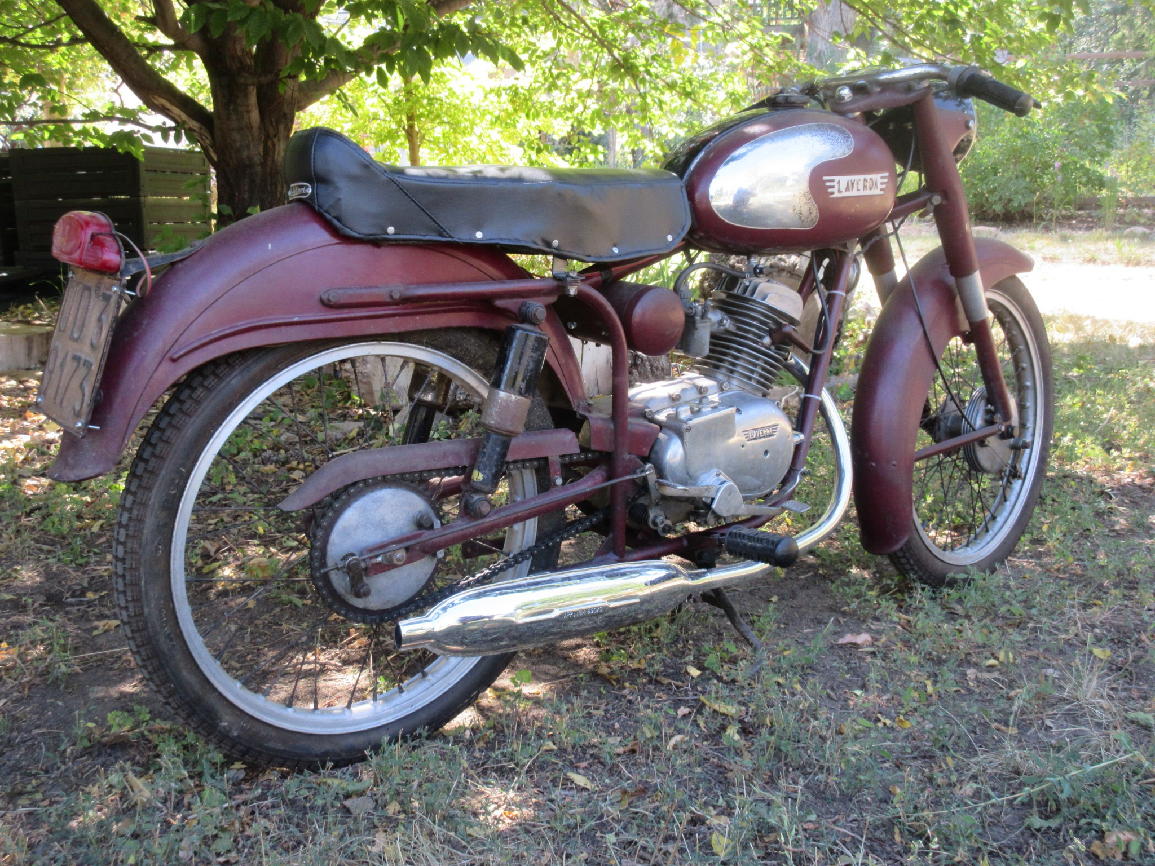 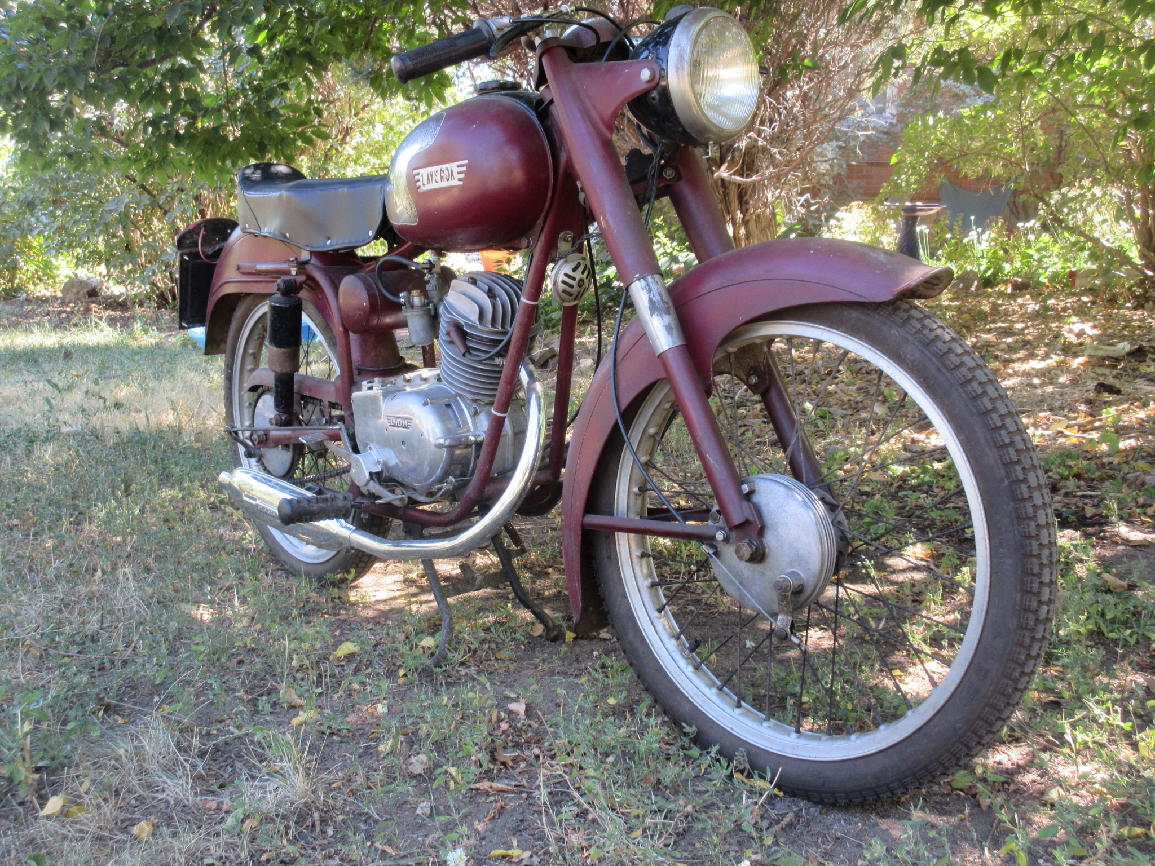 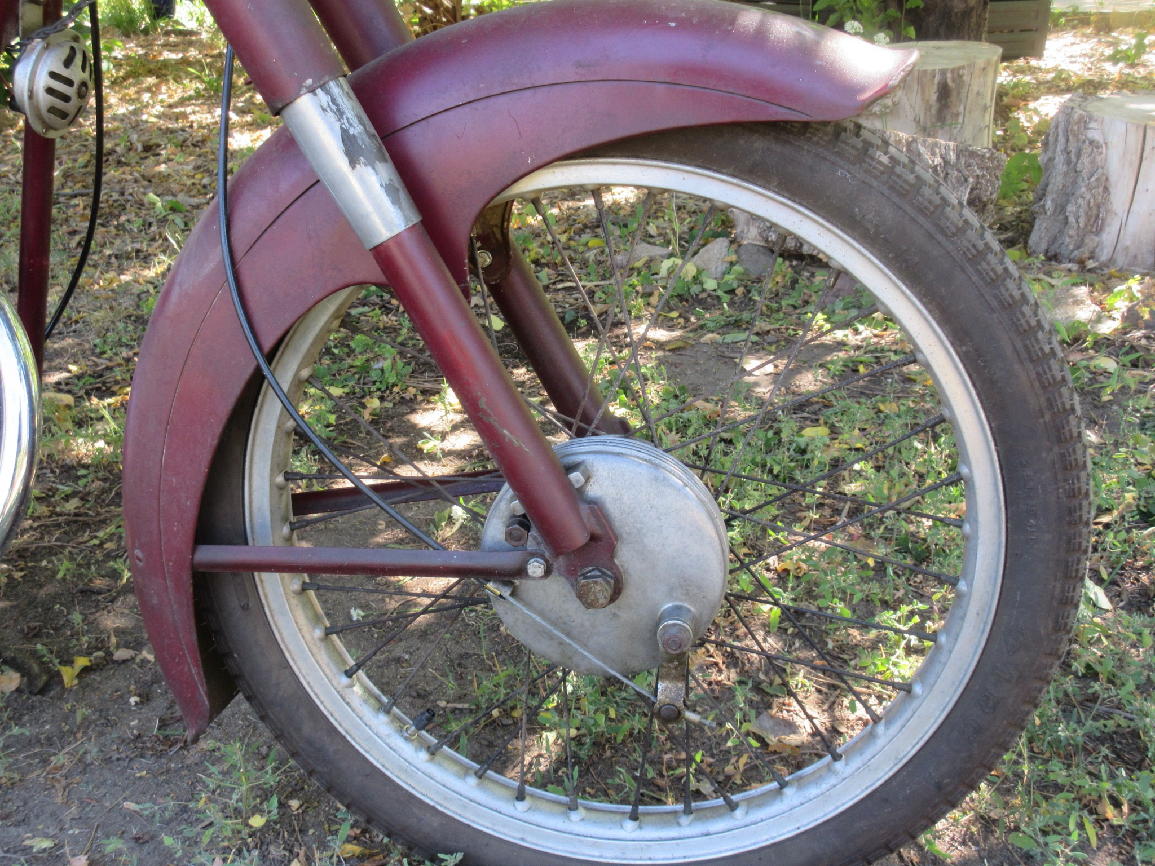 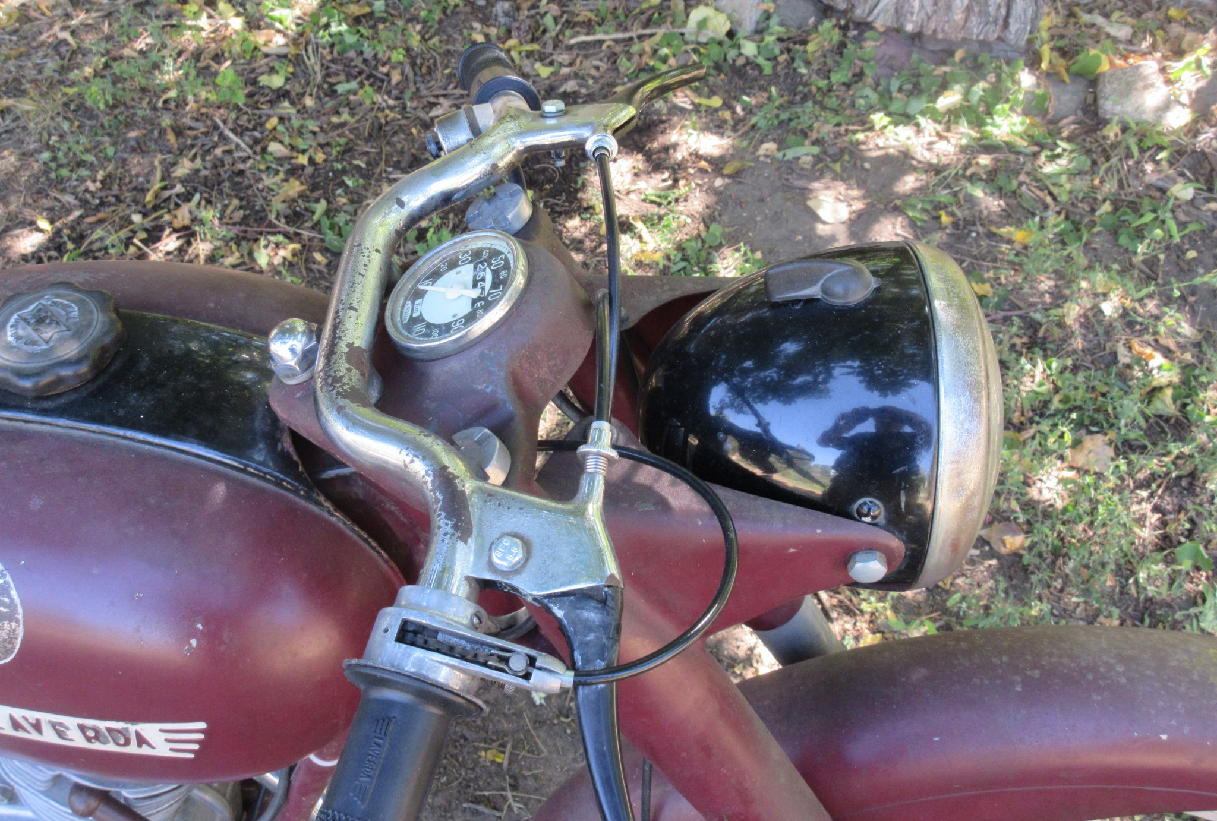 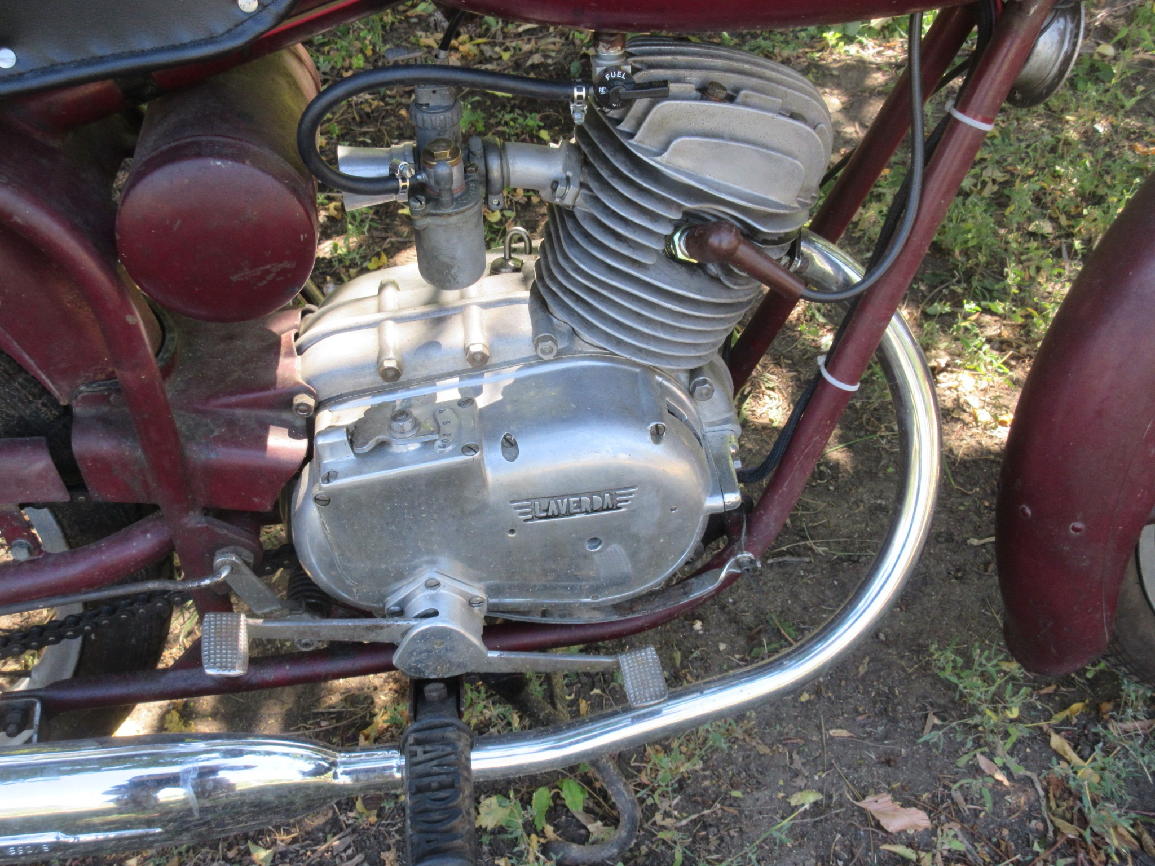 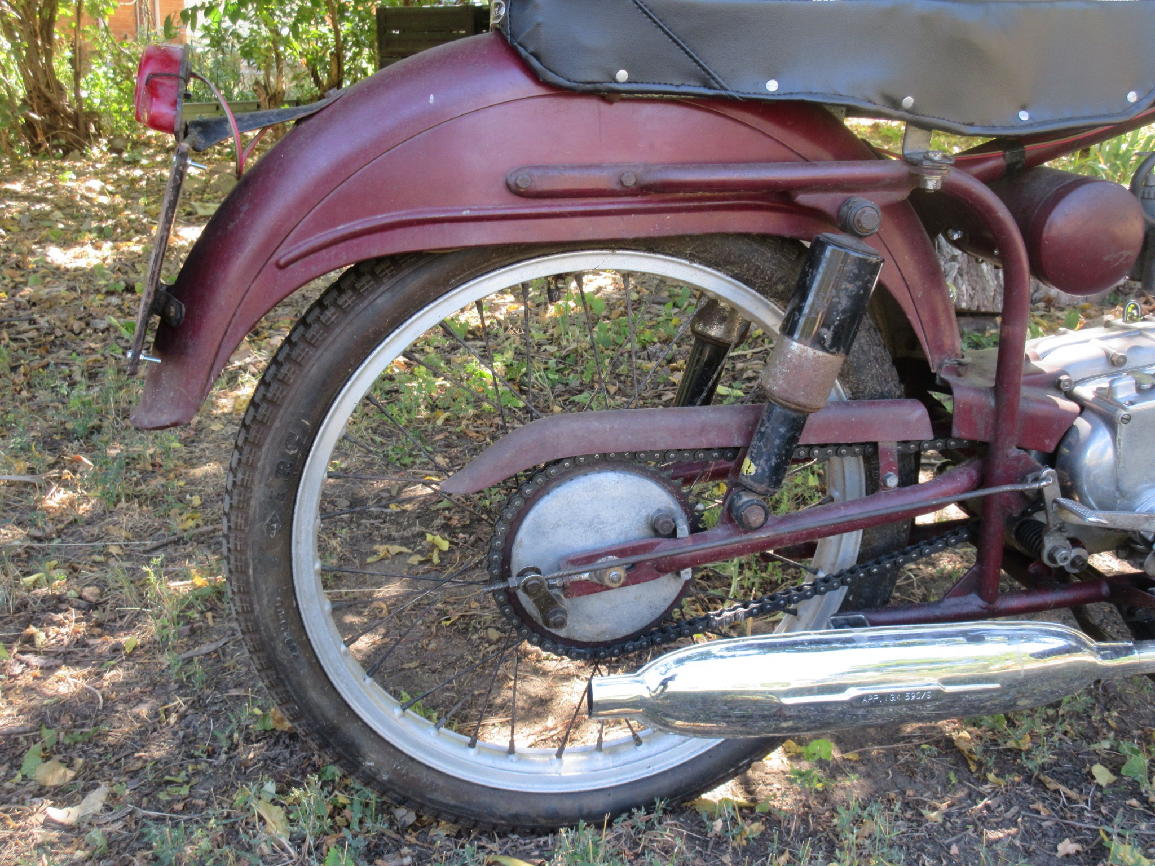 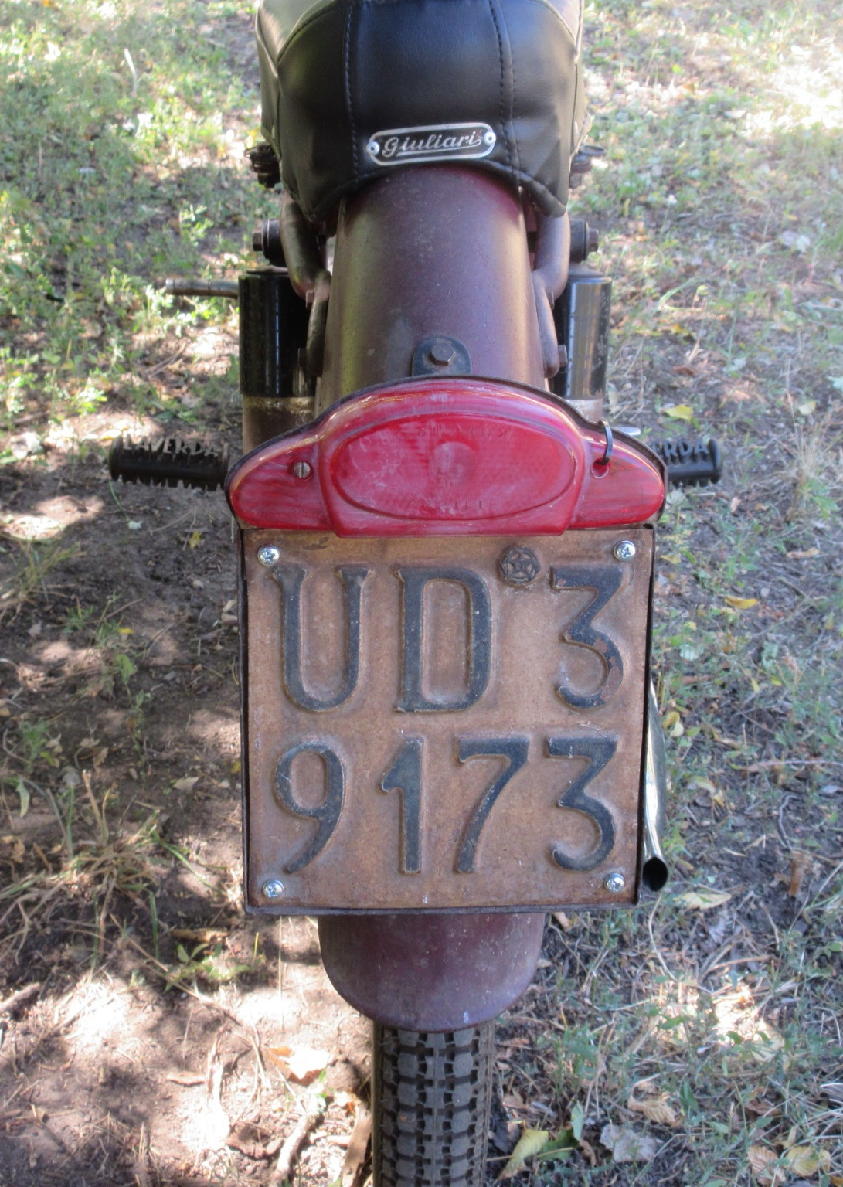 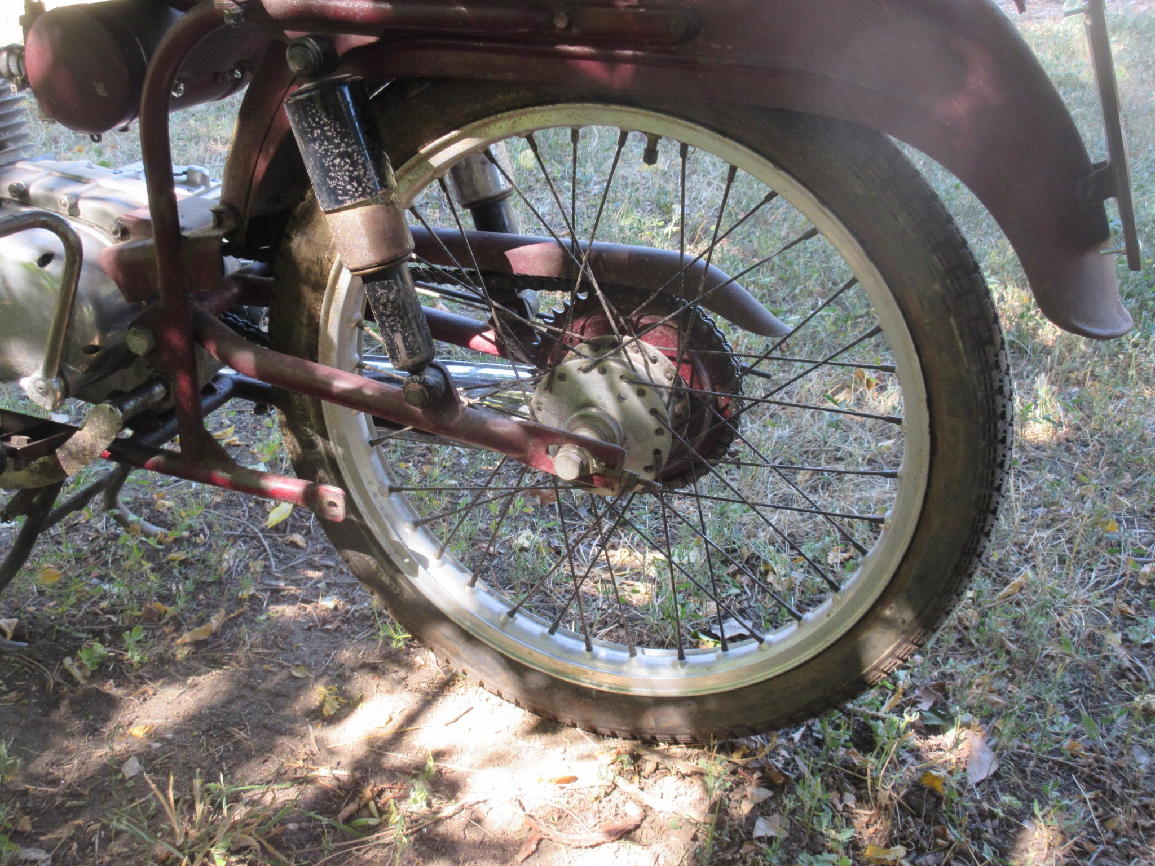 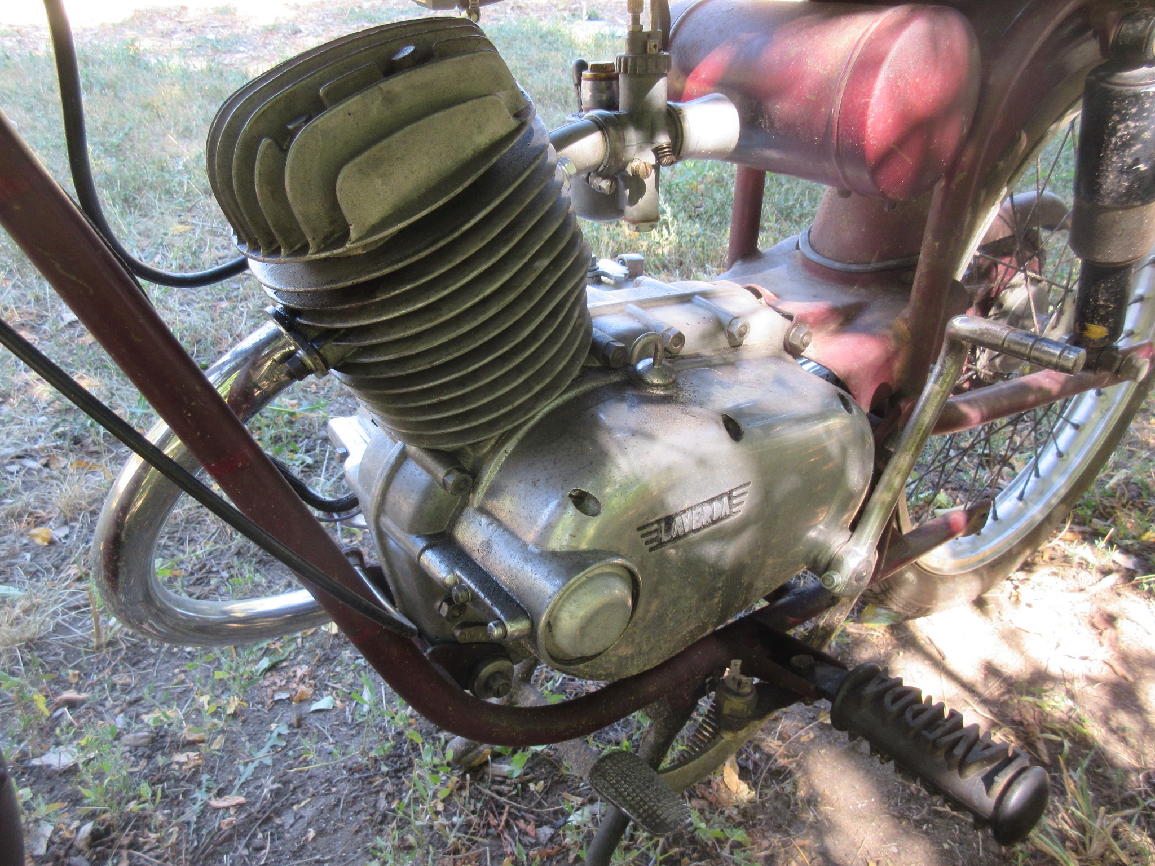 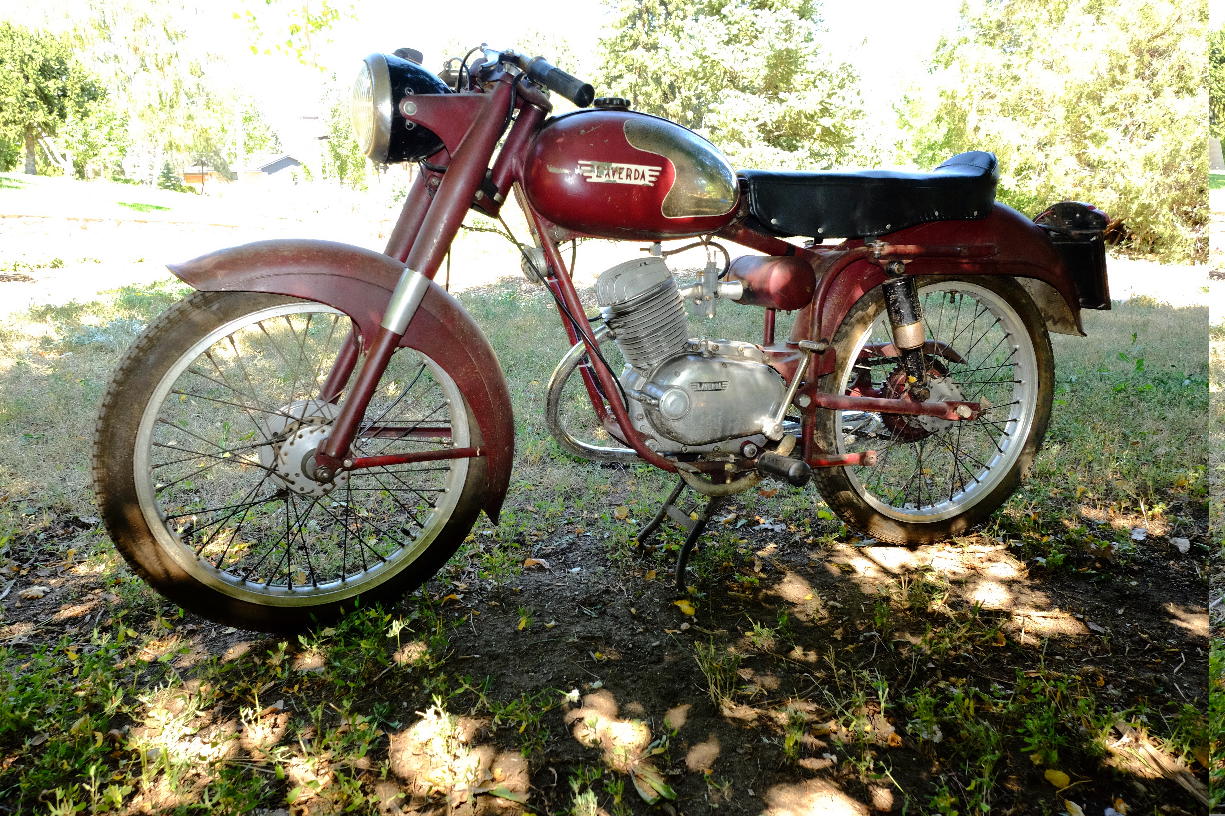