Once, during a period of dampened spirits, I bought a Suzuki GS1100E, a gigantic, powerful, shaft drive thing. I nicknamed it “Nagato” after the super-dreadnought Japanese battleship that survived WW2 and then survived an atomic blast during U.S. Navy testing in the Pacific after the war (the second test sank her). I won’t speak of it again. I also ran a T500 for a while in 1970s but there’s not much to be said about that one either, even though I liked it much more than the GS. No, the only Suzuki worth mentioning on this website is the mysterious and awesome “Tsubame”, my name for a project involving the design excellence of Craig Vetter and Evan Wilcox. This one has been on the back burner since 2007 (thanks, Nortons), but I hope to resurrect it soon.

The project started in the early 2000s when my friends Andi Seiler and Dave Webster both built Suzuki T500-based racers for a vintage race series in Colorado. When Andi had to return to Germany he couldn’t take the racer so I bought it from him along with the Moto Morini 3-1/2 cafe racer he’d built from parts that I sold him. I didn’t know what to do with it but one day I came across a photo of Craig Vetter’s personal T500 for which he’d built a one-piece fiberglass tank-seat combo and I was smitten.

I called up Evan Wilcox, who had done several wonderful alloy bodywork jobs for me and asked him if he’d be interested in replicating Vetter’s design in aluminum. Oh yes. In fact, Evan told me that he and Craig had been talking about a joint project of some kind for years. Evan then contacted Craig and learned that this project had never gone into production but he knew of one set of bodywork still in existence, in the custody of one of Vetter’s former employees named Dwayne Anderson. Dwayne kindly agreed to loan the bodywork to Evan so he could take measurements. 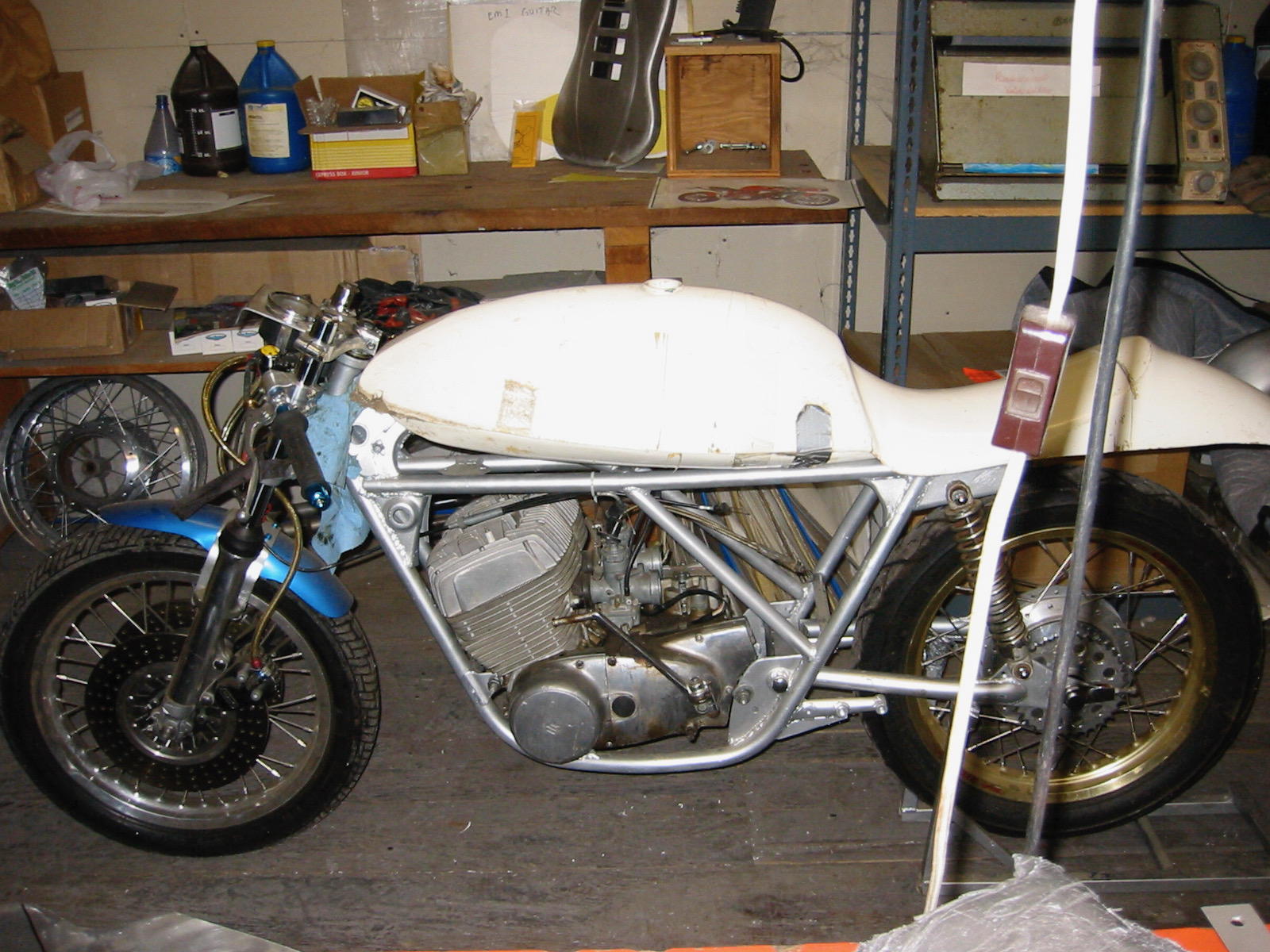 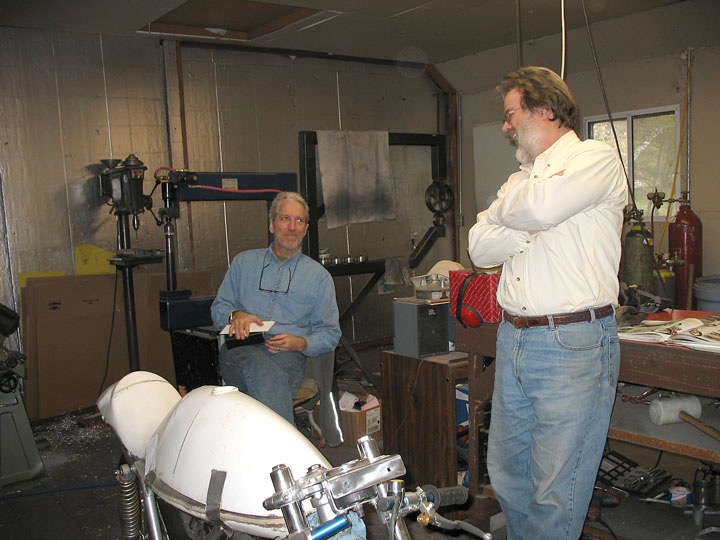 Craig also told Evan that the inspiration for the design was the Messerschmidt ME-262, the first operational jet fighter, which caused considerable misery for the allied bombers over Germany toward the end of World War II.

The Germans nicknamed the ME-262 “Schwalbe” or “swallow” after the graceful and maneuverable bird. Since this is a Japanese motorcycle I thought the Japanese word for a swallow, “Tsubame”, was a more appropriate name for the project.

Evan’s version of the bodywork was made in separate tank and seat units. Once he got going we had to make the other major bodywork elements equal in splendor, so Evan’s part of the project ended up with him fabricating a custom oil tank, a fairing, a front fender and expansion chambers, all in alloy. The fairing is a copy of the fairing used on the Moto Guzzi V8 GP bike. 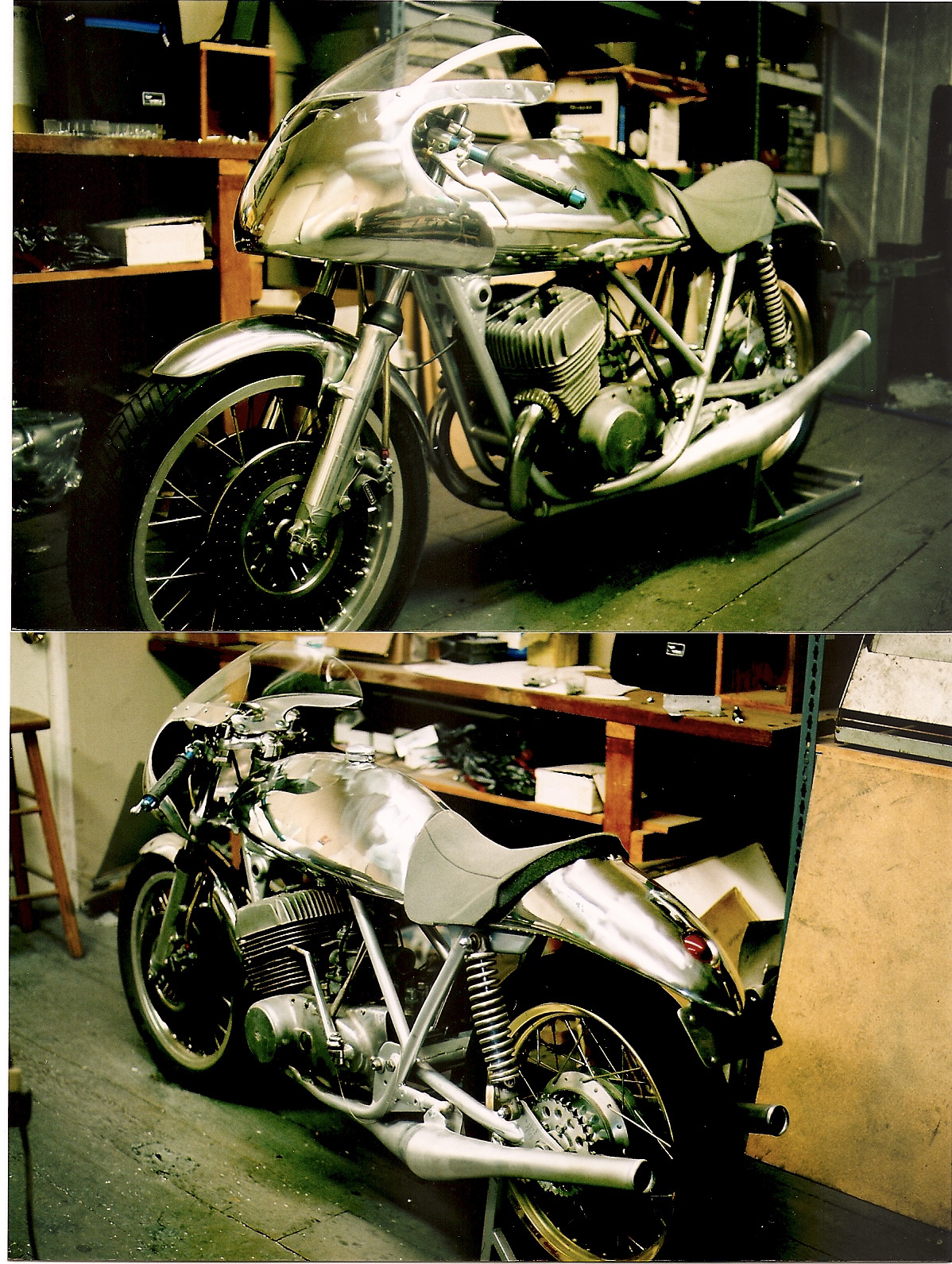 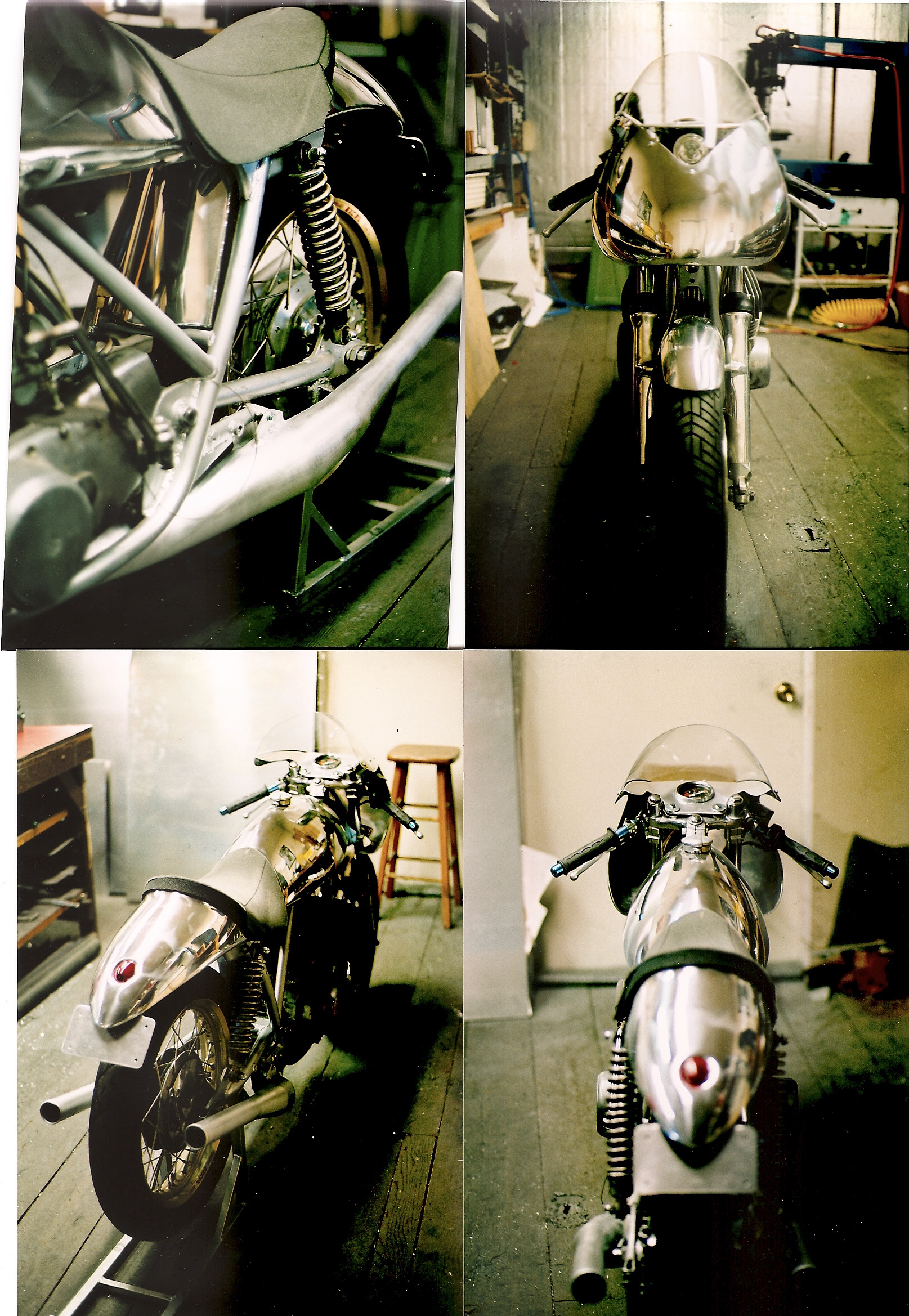 The bodywork was built for Andi’s vintage racer, which featured several modifications to the frame, extra tabs cut off, a diagonal brace added behind the engine, and a shortened swing-arm. I’m not sure this was a good choice, and I have considered going back to Evan to see if it would be feasible to make whatever changes would be needed to use the bodywork on a stock T500 chassis.