I wasn’t searching for another Laverda but when my friend Michael Fiore posted to the Moto Morini list in December 2009 that he’d decided to sell his RGA Jota I became intrigued. Even though I knew a good bit about Laverdas at that point, I had to do some research to understand what an RGA Jota is. More about that below, but I decided fairly quickly that I ought to buy it. Michael’s asking price of $6000 seemed quite fair.

This one has a VIN ending in “0006” and the engine number is 2490. Manufacture date is October 1983, making it a 1984 model. It came with considerable documentation, especially from the original owner, Louis Orsini of Eugene, Oregon, who bought it at TT Motors in Berkeley on January 30, 1986 for $5500. Not much appreciation by the time I bought it! The odometer read 36,646 miles when I picked it up from Michael, on the same trip in which I picked up my Laverda 100 Sport.

Here’s a better view of it, shortly after getting it home: 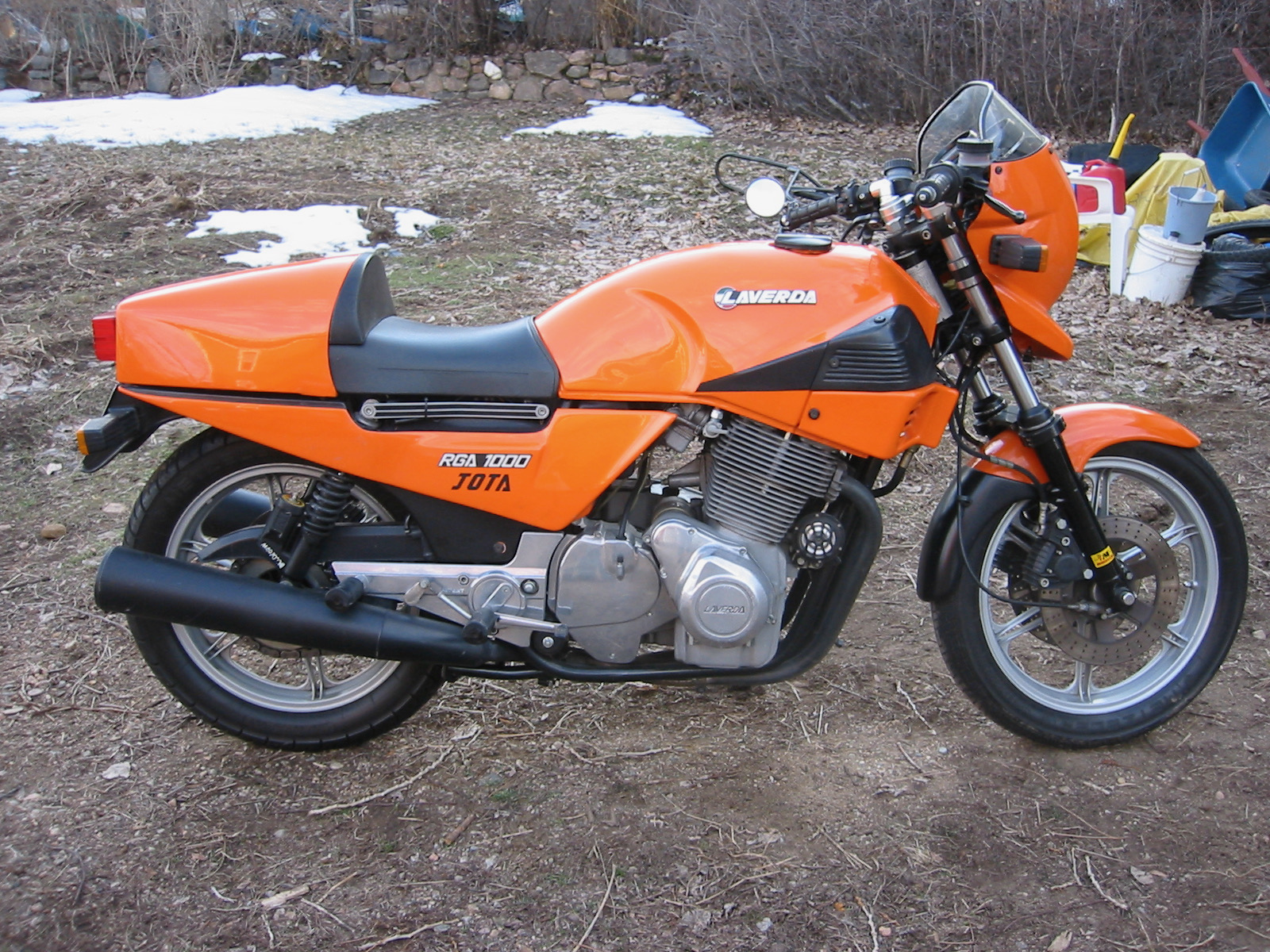 So, what is this? The RGA Jota was a less expensive and somewhat sportier-looking derivative of the better-known RGS model, a high-end sport-tourer based on the 120° crankshaft engine that Laverda introduced in the early 1980s. The running gear is identical with the RGS. The RGA Jota was marketed mainly in Germany and England where the “Jota” name still had sales appeal as a performance model, but this was simply badge engineering; the true Laverda Jota is an earlier model, developed in the mid-70s by the British importer Slaters, based on the original Laverda 980cc engine with 180° crankshaft. Very few RGA Jotas came to the U.S., maybe a half-dozen or so, according to Wolfgang Haerter, the main Laverda parts supplier for North America.

The styling of the RGA Jota was sometimes criticized when it was new; people didn’t like the bikini fairing and the “epaulets” on the front of the tank. The British importer at the time even commissioned a replacement “Sprint” fairing (first a full fairing, then a half fairing to keep the lovely engine exposed) that is very attractive but nearly impossible to find now. I find the RGA Jota to be strikingly beautiful, far more so than most of the motorcycles I see on the streets today and I get the same comment from most people who see it. I also think the bike looks better in person than it does in photos.

Although it is not a hotrod like the true Laverda Jota, the RGA Jota (like the RGS) provides a lot of performance, especially the type that involves extended riding at 100+ mph. Ironically the U.S.-spec speedometer is capped at 85 mph, which is about where the RGA Jota wakes up. In the 1980s you could still ride this way legally in parts of Europe. I am fortunate to live near a road where that kind of performance can still (almost) be used: I-70 crossing the Rocky Mountains. Between Denver and Grand Junction at the Utah border, about 230 miles, the RGA Jota is in its element. The high elevation and steep grades allow you to use all the power available, if not quite all the speed potential, and the chassis works beautifully at those speeds. In more mundane riding the RGA Jota often seems unwieldy. If you just ride it around the block on a test ride, you will probably hate it.

I have sometimes thought I should sell the RGA Jota. It’s getting to be awkward and nervous-making to muscle it around at low speeds and the amount of “appropriate” riding I do with it is quite limited. But the thing is so beautiful and admirable in it’s devotion to a single purpose that I’ve had trouble bringing myself to let it go yet. As of this writing (early 2023) I am once more in the “I should sell it” mode, so if a price of $9000 does not put you off, get in touch.